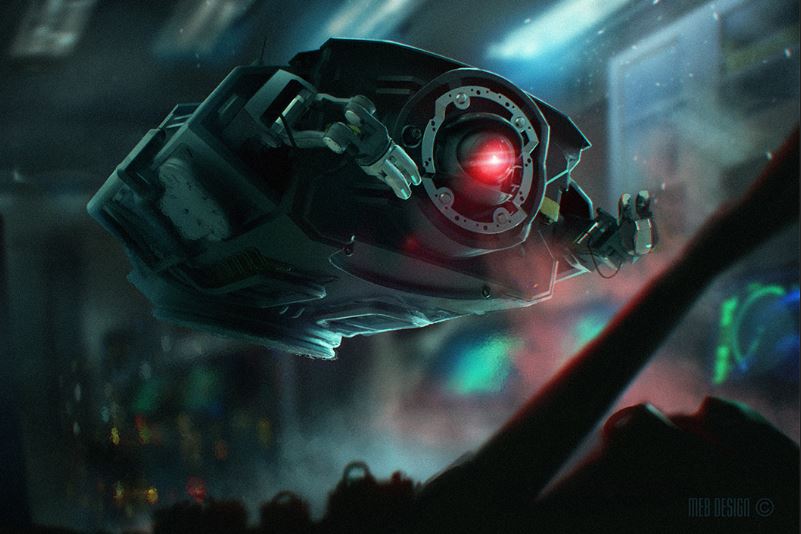 Mark Button has worked as a freelance Concept Designer for over five years. From a young age, he was obsessed with both film and drawing. After being introduced to what he calls his ‘Bible’ (The Art of Star Wars: Episode 1 The Phantom Menace), he put his two passions together and knew exactly what he wanted to do once he left school. Mark has worked for a range of clients including BBC film, LEGO (M2 Entertainment), Ubisoft, and FFP New Media. Recent work has been features in ‘Bill’ (2015) and ‘Assassin’s Creed’ (2016). I sat down with him to discuss how SketchUp has been instrumental in his design process, enabling him to produce a fast turnaround time for clients.

Hey Mark, thanks for joining us! Can you introduce yourself/your team to the SketchUp community?

Sure thing. Well, I’m a concept artist working in television and film. I work as a freelancer, typically for a few months to a year on a project, designing/developing whatever the client may require to tell their story. It is a collaborative effort with many people being involved throughout production –  so while I am one person, I always work in a team of amazing people.

How did you get going with SketchUp – and why SketchUp?

I started a project, in 2011 I think, and for the first time ever I was asked if I could use SketchUp for the job. I simply said ‘yes’ and quickly had to jump in to the program to get my bearings! As someone with little 3D knowledge, I found SketchUp to be simple to understand and intuitive. I believe it was picked as the choice program because it was easily accessible to everyone in the art department and it is great for blocking in quick architectural forms.

Can you tell us more about how your clients interact with a SketchUp model, and why you think it’s important they do so?

Again, I think its strength lies in how accessible it is to everyone. Personally, I’ve found clients who use SketchUp are able to return feedback and notes much faster. We will sometimes pass the model back and forth until it’s approved. Speed can be important in this industry, so a fast-to-edit program is great to have.

The story/script usually dictates what is needed. I tend to do “hard-surface” design which is anything from props to vehicles to sets. When a brief comes in, I’ll doodle ideas for myself then jump straight in to SketchUp and block out the design. I’ll further refine the design before making a quick render of the model in either SU Podium or Keyshot and then finish off the image in Photoshop. I’d say 99% of the time, that’s how I work.

What’s been the proudest piece of work you’ve produced?

I think the last project you worked on tends to be your best or most favourite piece until the next one comes along. Because of that, I’d say the work I’ve done in the past year has been pretty cool, but I can’t talk about that until it is released next year!

We’ll schedule in a catch-up with you next year then! In the meantime, what’s the one functionality you’re glad SketchUp has?

Components. Without a doubt. Components are a great way of saving on modelling time especially when you are designing with symmetry in mind. Once I learnt about components, my workflow really sped up.

I’ve heard that a lot about components – is there any particular keyboard shortcut you could not live without?

Wow, I’ve never thought about that before! I guess G is cool for setting up components quickly. B for the paint bucket. F for Offset comes to mind. The whole alphabet is pretty wicked, right?…I use ‘Intersect Faces’ a lot but I’m not sure that has a shortcut.

Aha! You can actually just assign your own personal shortcut to tools you use a lot. What about plugins – any essential ones you use?

Definitely. RoundCorner, JointPushPull and Curviloft are must haves. Also CenterPointAll helps a great deal. The SU Podium render plugin is really cool too.

Finally, if you weren’t doing what you do for a living now, what would you choose?

I do wonder this from time to time. This type of work is all I’ve ever wanted to do so I never really gave myself a backup or had any other idea in mind. If I really couldn’t do anything design related, then I’d say I’d work in or run a cinema. I’m as obsessed with film as I am with design so that might be my choice.