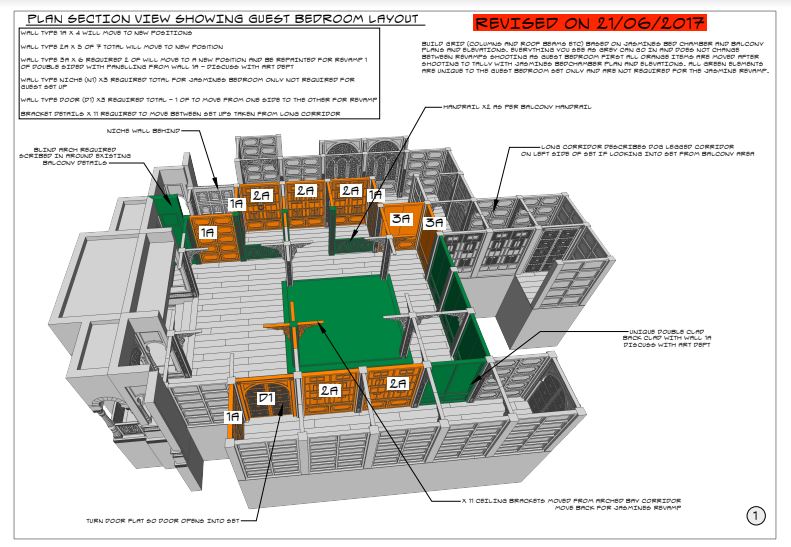 Luke Whitelock is a feature film Art Director who has worked on movies for clients as diverse as Marvel, Universal, and Disney for over 14 years. With a back catalogue including huge feature films such as “Aladdin,” “Avengers: End Game and Infinity War,” “Dr Strange,” “Beauty and the Beast,” “Guardians of the Galaxy” and “Inception” – he’s tasked with a major brief – bringing movies to life and realising the finished sets.

Luke has used SketchUp in his work for over 10 years. In the last 5 years, he made a transition from 2D board drawing to using only SketchUp and Layout – producing not only creative designs, but incredibly technical ones too. With a super hectic work schedule, we were happy Luke carved out some time to tell us about his methods and processes.

Hello Luke! So, how does SketchUp help with your design process?

SketchUp really is key to my design method. I hardly ever work things out on paper anymore.

I start with massing the shapes of a set – width and height of a set is established fairly early on as we are limited to stage sizes. So I’ll start by massing the walls and the different floors if there are any. Everything just goes onto Layer 0 to start with and this enables me to work quickly and freely. Sometimes a design will come together really quickly and sometimes it takes a while. It’s like sculpture in a way; I start with these 3D blocks, gradually chip away at it and break it down into components and groups. The way I work in SketchUp will often inform the design as I go along.

How did you get started in the industry?

I was lucky to have a very kind and encouraging graphics teacher at school. He was one of the first people to notice my ability and helped guide me towards a more artistic route. It’s because of him and my art teachers encouragement that I decided to go to art school. I studied at Bournemouth Arts Institute- first on an arts foundation course, then onto an audio visual diploma, then finally settling on a Film degree. I learnt a lot but always knew if I wanted to do this for a living I would have to move to London.

The opportunity came soon after graduating in 2004 when a friend offered me a spare room in a house share he was setting up in South London. I moved out with no belongings apart from a stereo and some records and moved in October 2004. I knew nobody in the film industry apart from a couple of TV art directors who had done some visiting lectures at the Arts Institute. I pestered them until one relented and gave me a start on a small channel 4 show called Sugar Rush. I did a few TV jobs before getting my film features break on “Elizabeth: The Golden Age”. It was whilst on this project in 2005 that I started Drafting by hand. I knew the basics of drafting and basically learnt on the job. It was around this time I first became aware of SketchUp. I used it but never really worked out how to incorporate it into my workflow.

What was your ‘Aha!’ moment working with SketchUp?

A few years later, features work had dried up in the UK. The writers strike had caused all productions to either shut down or move to Prague. For about 6 months I was completely out of work. I used this time to teach myself SketchUp. When the phone rang one day and a designer asked if I was free to do a commercial and could I use SketchUp, I lied and said ‘yeah!’

It was a baptism of fire working from home and teaching myself the program along with Layout which is a fantastic drafting package but I’m really glad I did it. Although I would still draft by hand most of the time, I found as the years went by I was using SketchUp and LayOut more and more – at the point on “Thor 2: The Dark World” in 2012, I did my last hand drawing and have been exclusively using SketchUp and LayOut ever since.

What kind of projects interest or excite you the most?

I love all kinds of projects. I suppose sci-fi is most fitting with SketchUp, but I have used the program to design ancient castles, Georgian houses, rococo ballrooms – and even my own garden!

Any essential plug in/extensions for you?

I love so many plugins and use them all.

I’ll block everything out (massing model) in SketchUp and set up my sectional views very early on.

I’ll also set up the drawing in LayOut very early on, as the LayOut and SketchUp file are dynamically linked so setting up the viewports early means the drawing basically takes care of itself.

I’ll use a trick of exporting the sections and overlaying them on my section cuts and then I’ll maybe do a few renders using V-Ray. I’m still learning that since moving from SU Podium last year.